Bell Show
Our first Show of the season was at Bell today. Chief won his first broad ribbon and was Grand Champion Droughtmaster Bull. Aura (with her calf, Ace) was Grand Champion Droughtmaster Female, and also Supreme Champion Tropical Female. Overall an incredible result for our first outing of the year, and a big thank you to Les and Leanne @ Leegra Fitting Service who do a great job on our behalf.

Proston Show
We didn't make it to the Proston Show, but Leegra Fitting took Chief and Aura (and Ace) and had a successful day. Aura won her class , was Senior Champion and Grand Champion. Chief won his class. 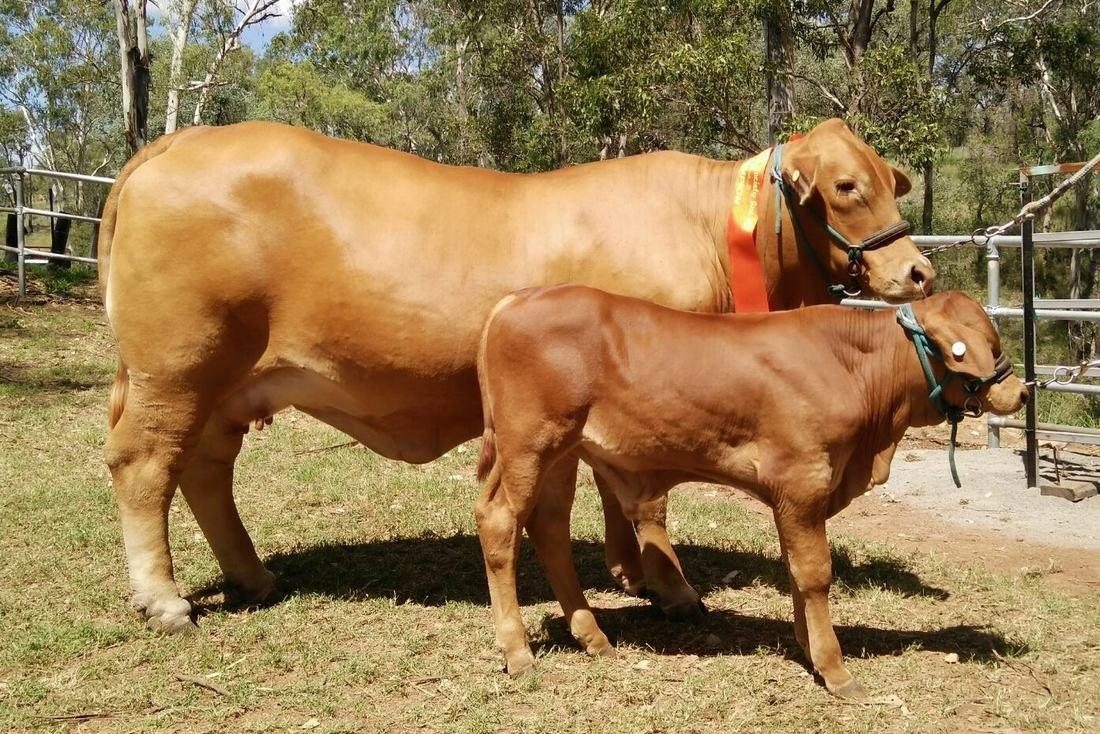 Murgon Show
There were a lot of cattle at the Murgon Show today. Thanks to Les and Leanne @ Leegra Fitting, Chief and Aura had a great day out :-) Aura was Senior Tropical Cow. Chief was Junior and Grand Champion bull. 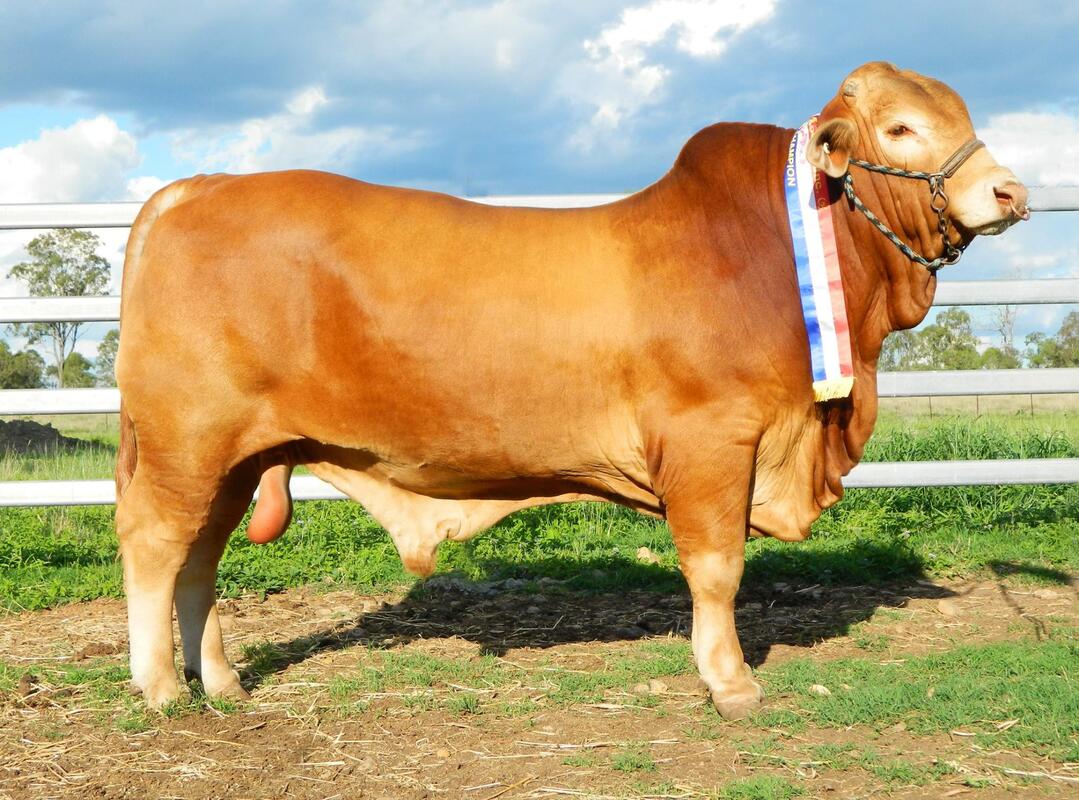 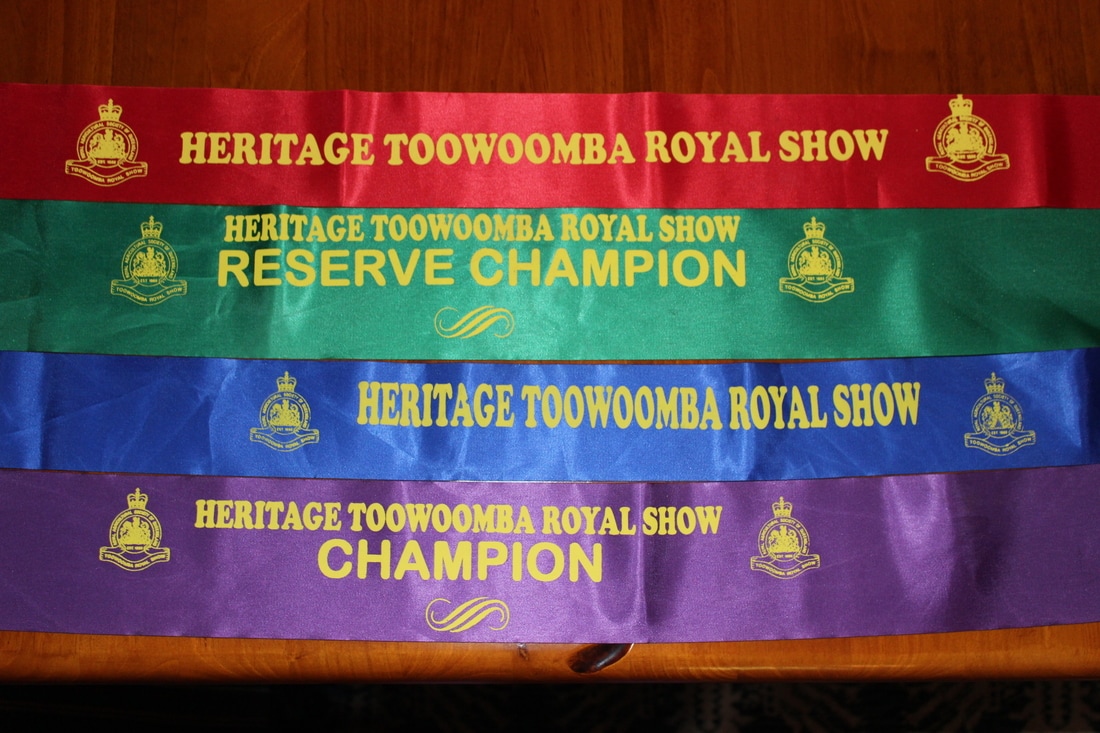 Supreme Champion at Gayndah
Wow! What a big day at Gayndah. There were very big and strong interbreed classes through out the whole show. Chief was Supreme Exhibit...which we are so excited about. Aura won Reserve Senior female, and looked fantastic with Ace by her side. Leegra Fitting have done a great job! 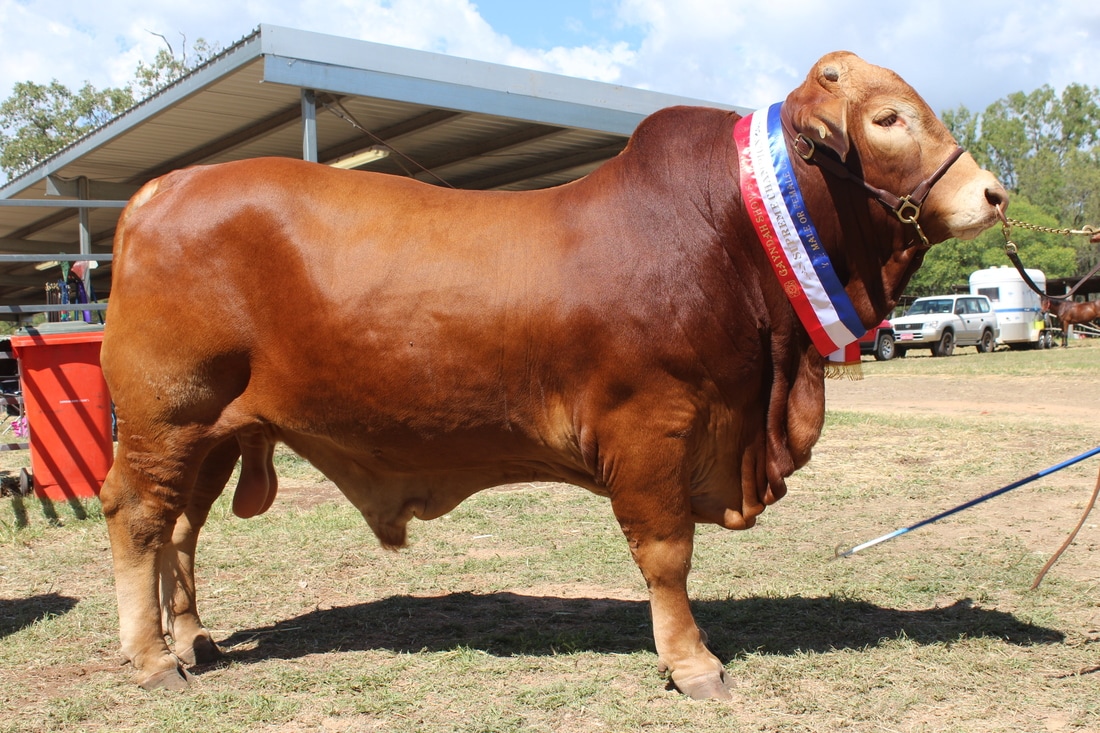 The Monto Show was held over the long weekend. Saturday was the Brahman Feature Show and Sunday was the stud cattle judging. The cattle were judged as All Breeds. Chief was Champion Junior Bull. Leegra Fitting have done a great job with him, and he looked impressive in the ring (although we are probably a bit biased). Aura and Ace finished third in their class, with Ace really starting to power on. Again, thanks to Les and Leanne at Leegra Fitting for all their efforts. The 'team' is looking great. 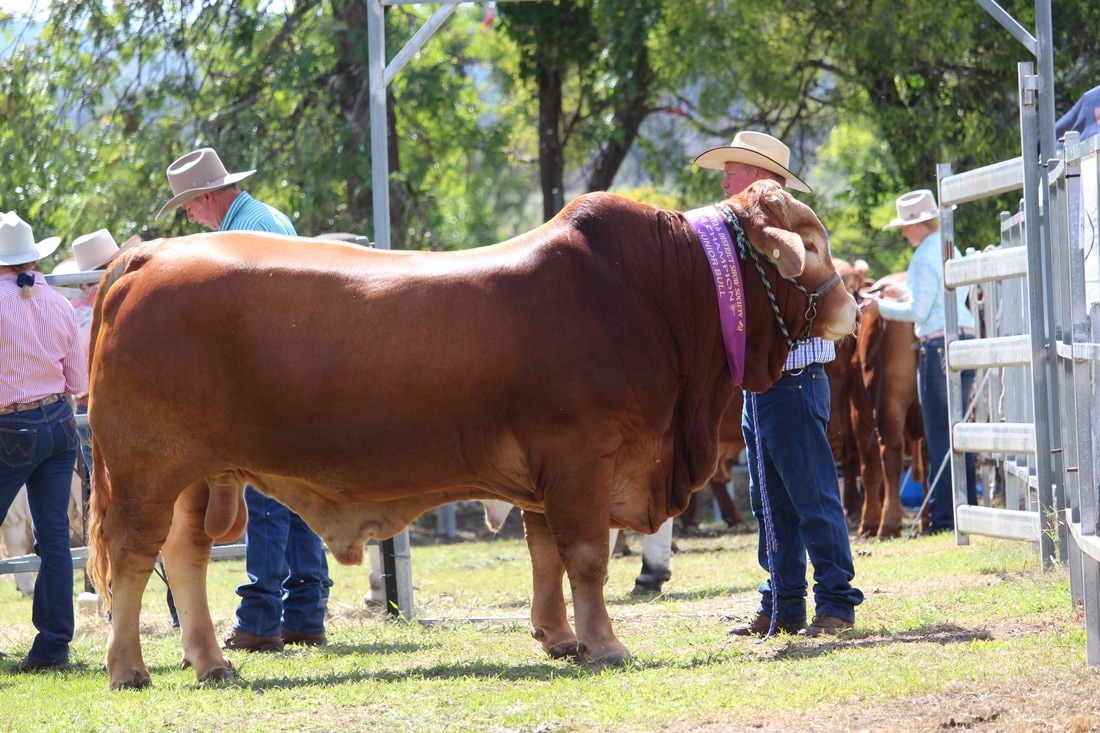 It was the Kingaroy Show today....both Chief and Aura (+ Ace) won their classes , and went on to be Senior Champions and Grand Champions. Les and Leanne at Leegra Fitting do such a great job.

Wow!!! That sums up yesterday's Gympie Show for us. Our 'team' did us proud. Chief was Junior Champion and Grand Champion Bull and then went on to be judged Supreme Exhibit at the Droughtmaster Feature Show. Aura (and Ace, her calf)was Senior Champion Female and went on to be judged Grand Champion Female. It was amazing to see both of them out in the ring being judged for the final ribbon of the day. Thank you to Les and Leanne at Leegra Fitting, who were kept super busy all ...day, and again, did a fantastic job. Needless to say, we think the judges, David Greenup and Megan Krause, did an excellent and consistent job :-) Also thank you to the Droughtmaster Society, the Gympie Show Society, all the Sponsors and exhibitors who make the effort to be at the Show. It was a real honor for us to be part of such an event with so many quality Droughties on show.
UPDATE: The Interbreed judging was held this morning. Aura and Ace finished 3rd in the Senior Female. Chief won the Interbreed Junior Bull, and went on to be the Interbreed Opposite Sex. Congratulations to Oakwood Limousins for taking out the Supreme Champion Exhibit.
The 'team' also won Dams' Progengy... a full brother and sister team.
Chief also finished equal 3rd in the Super Bull competition.
What a Show! 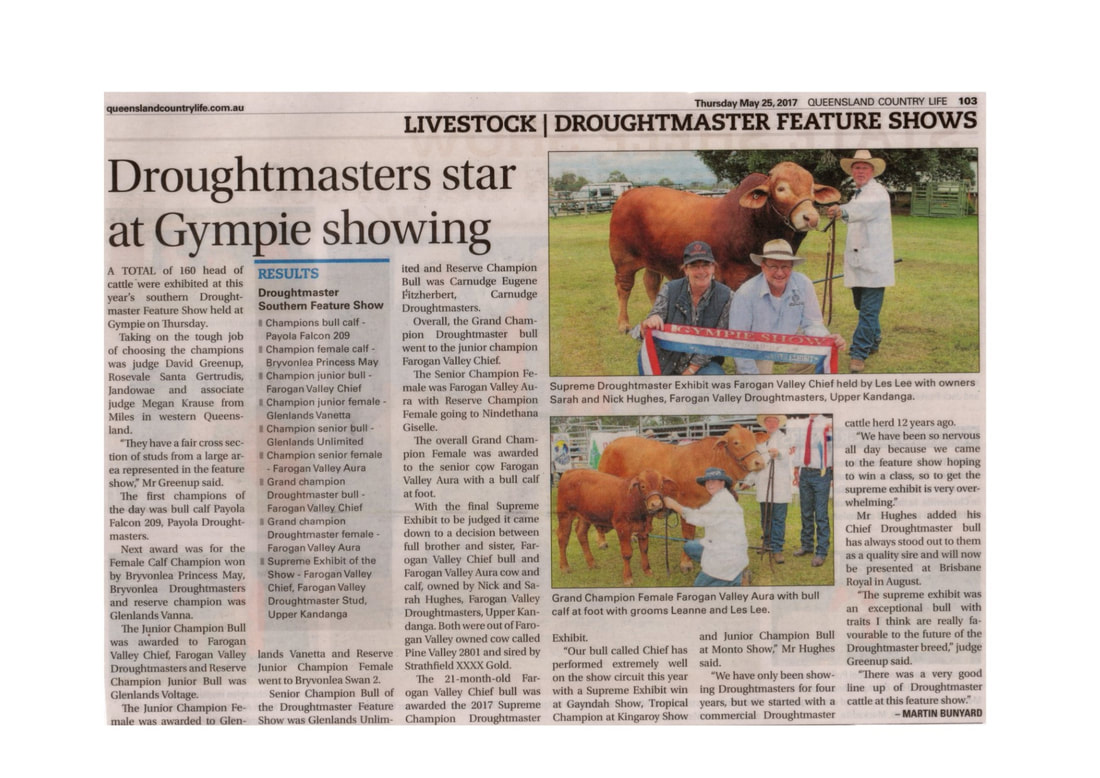 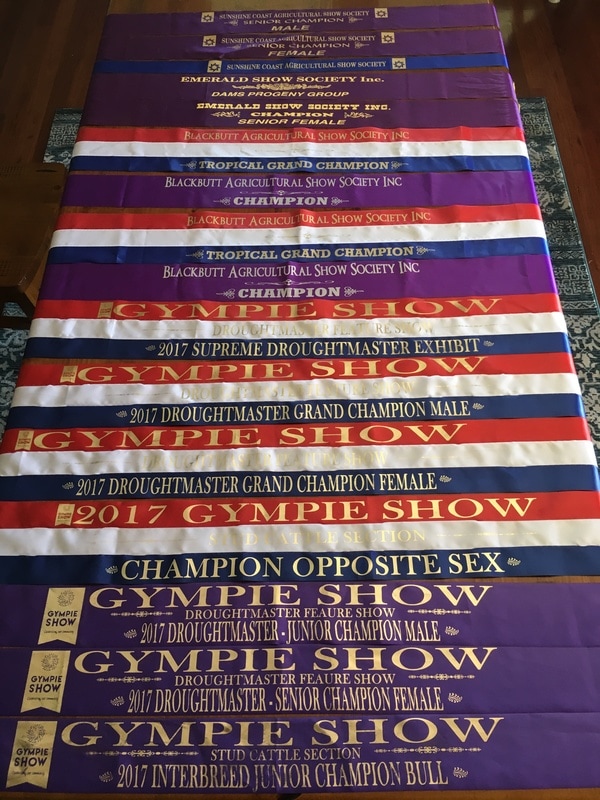