My name is Austin Taylor
I am 71 years of age, been on the land my whole life and had some wonderful dogs.
Currently I have had Sophie some three years, having purchased her when she was two and was basically trained for sheep and cattle.
I have trained Ridgebacks to high levels of obedience and competed them all over Australia. I have won Obedience competitions in Western Australia, Northern Territory, Queensland, New South Wales with them and trained the first Rhodesian
Ridgeback to ever gain an Agility Dog Title in Australia on the 23rd September 1990.
I have worked sheep dogs since 1967 to the present and my current dog is the best of them. She is a dominant bitch, but so stable, intelligent and intuitive that she amazes me with what she adapts to. Not only is she an excellent sheep dog, a capable cattle dog but I am now also using her as a dingo sensing dog as I am now professionally trapping wild dogs.
She sleeps on the verandah in a solid kennel, can see me at the kitchen window during the night or first thing in the morning. Temperatures drop to minus 4 here some nights and there is nearly always a frost during the winter, I am 600 feet below the snow line.
Sophie is wonderfully obedient but at the same time capable of decision making that is absolutely essential with a good working dog. Her loyalty is unquestioning and she gives every bit of 100 percent to you. An indication of this is that she has never left a mob to get a drink or cool down in a trough, leaves that until the sheep or cows are yarded and then heads for what she needs. Constantly maintains eye contact with you at all times.
I can recommend this line of working dogs to anyone who needs a good reliable dog and believe me they make wonderful companions too, Sophie talks to me and I let her spend at least ten minutes a day on my lap as reward for the effort she makes daily to make my life easy.
Her breeders have kept in touch ever since I bought her and they will give you every help you may need to get the best out of any pup or dog you are fortunate enough that they entrust you with.
I can only say Sophie is worth every cent I have ever spent on her, put your initial training in and be firm but consistent, and never cruel and a Farogan dog will serve you to the end.

Wonderful dogs and wonderful people, I recommend them to anyone. 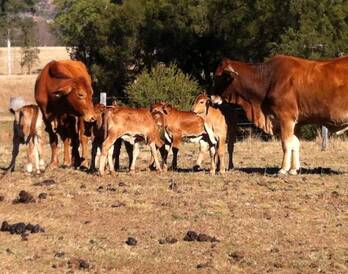 ​
Little beauties: The Keitley's recently received their first drop calves by the bulls they bought from Nick and Sarah Hughes, Farogan Valley, at the 2017 Droughtmaster National Sale, and said they're very impressed with the overall quality of the progeny.