Gayndah Show
It was the first show of the year for us, but more importantly, it was the first show for Aria...Aura's calf by Oasis Mufasa(AI). Aura 'knows the ropes', and Aria was in good hands, and behaved well. They were in a large class (24 months +), and finished 4th. There was a big showing of cattle across all classes, and the Show Society should be congratulated on their efforts. Also, to Les and Leanne @ Leegra Fitting...they do a great job on our behalf...Thank You.
Dalby Show
The Dalby Show was today. Aura (and Aria) was Supreme Champion of the Show. Les and Leanne @ Leegra Fitting do an amazing job... Thank You. Also, thank you to the Dalby Show Society for hosting a great show.
Nanango Show
We had an awesome day at the Nanango Show today. Aura (and Aria) was 1st in her class, then went on to be Senior Champion Female (tropical), Grand Champion Female (tropical), Supreme Champion Female (interbreed). And then finally she took out the Supreme Led Exhibit of the Nanango Show! What an amazing result. Les and Leanne @ Leegra Fitting Service, once again, do a fantastic job in preparing and showing the girls for us...thank you. Thank you also to the Nanango Show Society. Onward to Beef 2018 in Rockhampton. 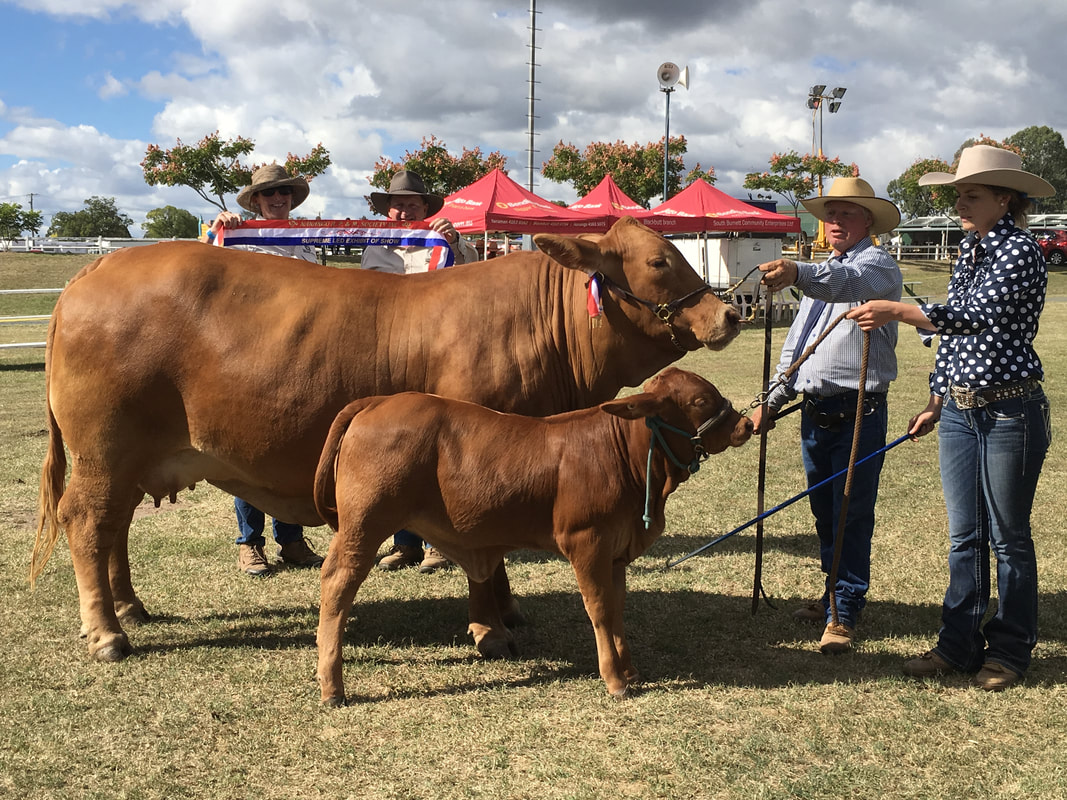 Grand Champion
Droughtmaster Female
Aura (and Aria) were our superstars at Beef 2018. With everything riding on their shoulders, they did not disappoint us. Aura was named Grand Champion Droughtmaster Female.....what an achievement for this girl. She has truly taken us on an amazing journey since the day she stepping into the judging ring. In the interbreed judging, she finished in the top 10, which again, is a fantastic result.

Gympie Show
Aura and Aria were at the Gympie Show. Being only a week after Beef Week, it was great to see so many cattle out in the ring. Aura was Grand Champion Female Droughtmaster. She then finished 3rd in the interbreed competition today. It's been a big week for all concerned. Thanks to Les and Leanne at Leegra Fitting, and the Gympie Show Society.

Supreme Exhibit - Bundaberg Show
It was a bitter sweet day today. It was Aura's last outing at the Bundaberg Show, and she did it in style, taking out the Supreme Exhibit of the Show ... so very proud of our girl. Words do not express how amazing Leegra Fitting are, and all that they do. We breed them...you show them.. and she has taken us on an amazing journey...thank you! Now she comes home, and lives her life out in the paddock..